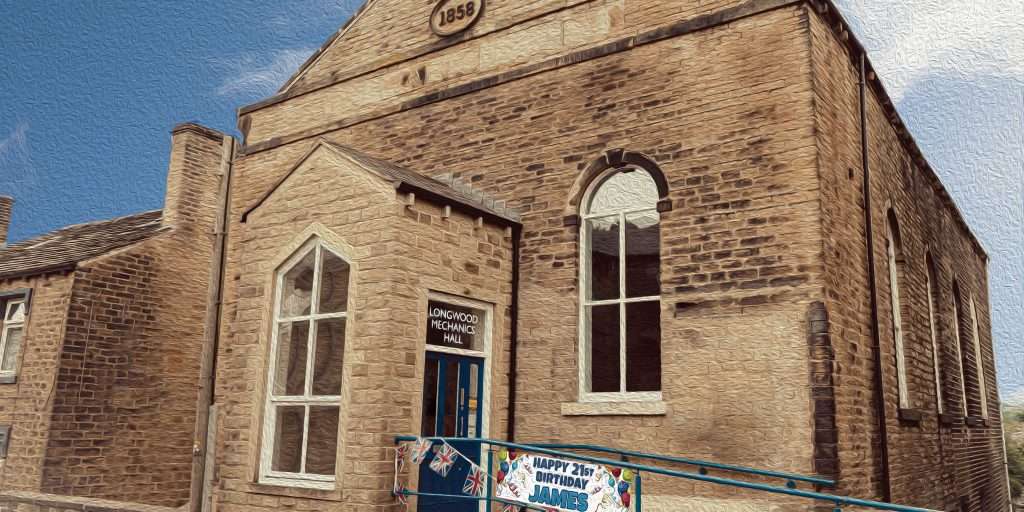 Longwood is located in West Yorkshire about 4km from Huddersfield. The Longwood Young Men’s Improvement Society was formed in the 1830s and met in the Huddersfield Temperance Coffee House. This group was renamed as the Longwood Mechanics’ Institute in 1844 and continued with meetings and educational activities in the Longwood Baptist Schoolroom. Following a meeting held in the Baptist Meeting House on 13 June 1857 chaired by the Rev. Charles Packer, the gathering, which comprised both members of the Institute and Longwood News Room, was informed that upwards of fifty scholars were being accommodated of an evening, but there were 65 males and 15 females on the list. It was then resolved that both the Institute and News Room jointly build a Mechanics’ Hall.

The sum of £160.10s was subscribed on the night and collectors were dispatched through the district to raise more. A further meeting on 26 June resolved to construct a building on land leased from Sir Joseph Radcliffe. A subscription list was drawn up and the two storey building of ‘coursed, squared rubble with ashlar dressings and a stone slate roof’ was to be constructed and the foundation stone was laid on 30 September 1857. The Institute ‘of plain and substantial character’ likened to a ‘non-conformist chapel’ was officially opened by benefactor Lieutenant Colonel Edward Akroyd MP on 6 October 1858 at a cost of around £750. As well as classrooms, a school room, a concert hall and reading room, the building incorporated two cottages for the use of the caretaker and schoolmaster respectively.

Each year industrial chemist David Dawson (1808-84), the Milnsbridge Poet, delivered ‘a rhyming description of the past and present history of [nearby] Milnbridge’ at the annual soiree of the Longwood Mechanics’ Institute. In 1876 the school was transferred to the Longwood School Board, which in 1883-84 built the Goitfield Board School to serve as a boy’s school and Institute school use ceased in 1884 when students were transferred to that campus.

However educational and community use continued, supplemented by a lending library and a small saving bank. The Hall was requisitioned by the Ministry of Defence during World War II and because of the Prisoner of War Camp at nearby Salendine Nook, the name was removed from the front of the building to prevent the area’s identification.

In the 1990s the community nearly lost their Hall but with a determined plan restoration has been ongoing. In 2008 a disabled ramp and porch were added to the front of the building as a 150th anniversary project. A highlight of the year was the opening of the foundation stone to reveal the time capsule placed there in 1858. Longwood’s Home Page at longwoodmechanicshall.org.uk tells us much and is an exemplar of what a home page could be.

‘A true community building set in the Colne Valley of Huddersfield, West Yorkshire  HD3 4UU United Kingdom. The Victorian Building is held in trust by the Longwood Village Group for the residents of Longwood.

Main Hall has a large stage with capacity of 80 for dancing and 100 for Shows. Library and information centre. Meeting rooms: Old School Room/dance studio for meetings of up to 30 people; Art Room for meetings of up to 12 people; Philip Taylor Room capacity 8.’ Indeed it is now a busy place with Table Tennis, Art Clubs, Ballet & Martial Arts as well as hosting the Longwood Art and Craft and Village Shows.

References: The Institute’s records are held by the West Yorkshire Archive Service as KC580 and KX248.

The Longwood Mechanics Hall was built in 1858.

It has gone through many ups and down in it’s history. The Hall has always been owned and run by the villagers of Longwood. We are sure that in the future the Hall will continue to be a central part of the Village; providing essential services for the community. Please help us look after the Hall for future generations, support the Building Fund.

The aim of this fund is to establish a separate pot of money specifically for the major repairs and maintenance to the fabric of the Longwood Mechanics Hall. This also includes the heating system, drains and also the possible purchase of land if required.
We have included land within the fund. This is be-cause a similar successful scheme was set up many years ago across the valley and this generated income to purchase plots of land in the community instead of it being sold off to developers.
The fund totals will be published at the Longwood Village Group AGM in May each year.

Support your hall with the building fund.